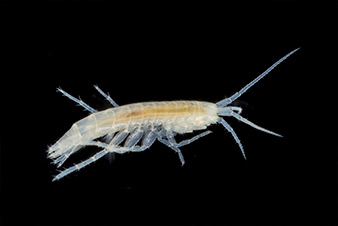 Authored by Connor Helsel
Peck’s Cave Amphipods (S. pecki) subsist in and around groundwater springs, seeps and upwellings in the Edwards Aquifer. These areas are largely hidden, yet sensitive to changes in springflow, drought and pollution that afflict the aquifer. The Edwards Aquifer Habitat Conservation Plan implements water quality monitoring and Conservation Measures such as the Voluntary Irrigation Suspension Program Option and the Aquifer Storage and Recovery programs to help maintain springflow for these aquifer dwelling species.

Explore how the EAHCP helps protect the Peck’s Cave Amphipod

The Peck’s Cave Amphipod is a subterranean aquatic species in the Crangonyctidae family. Amphipods are generally described as having five pairs of legs, two pair of antennae and a “laterally flattened body” (Holsinger, 1967). The Peck’s Cave Amphipods are eyeless and unpigmented, traits specific to the Stygobromus genus. Populations of the species in the Comal Springs have been observed to have an orange hue, which is attributed to its food supply (Blake & Everett, 2017).

A microscope examination is usually necessary to distinguish the Peck’s Cave Amphipod from other species (USFWS, 2013; National Academies of Sciences, Engineering, and Medicine., 2018).

Little is known of the lifespan and reproduction of the species in the wild, however, captive refuge populations are under further study.

The Peck’s Cave Amphipods are found in Comal and Hueco Springs and have been collected around Panther Canyon in New Braunfels, Texas (USFWS, 2013).

They are opportunistic feeders, with a diet comprised of both bacterial biofilm atop woody debris and other small invertebrates (Blake & Everett, 2017).