The EAA Act: A Success Story

The EAA Act is the guiding legislation for the EAA, requiring comprehensive regulation to protect the water rights of permit holders and to preserve the aquifer for all that depend upon it. The passage of Senate Bill Number 1477 in 1993, was scheduled to become effective on September 1. However, due to legal battles, the EAA did not become fully operational until June 28, 1996.

Recently, the EAA analyzed Edwards Aquifer water-use trends to see what measurable impacts, if any, have occurred since the implementation of the act. We asked, “What would our aquifer look like without these mandates?”

The findings were startling. Clearly, we have learned to do more with less, but why? The pumping limitations of a permitting system, the value assigned to Edwards water by the creation of the Edwards water market and the introduction of improved technologies are all factors that help sustain our main water source while also giving rise to a great, regional conservation ethic.

Case in point: A long and sustained growth trend in pumping from the aquifer that tracks back to the 1940s suddenly began to flatten in 1997 and has remained flat since. In other words, because of the EAA Act, pumping growth was stopped.

A comparison of historic pumping trends to those between the years 1997 and 2014 indicates that an estimated 2.6 million acre-feet of Edwards water, which in years past would have been pumped (based on pumping growth projections) to meet demand, stayed in the aquifer.

This quantity of water left in the aquifer translates to approximately 1.95 million acre-feet of resulting springflow, which benefits threatened and endangered species and river flows; 650,000 acre-feet (more than two billion gallons) more water in the aquifer; and, on average, aquifer water levels 17 feet higher than otherwise predicted for this 1997-2014 period.

To emphasize the point, without this conserved water Comal Springs likely would have gone dry during the summer of 2014 because of the drought, as they did during the historic drought of the 1950s. This is important given that maintaining continuous minimum springflows to comply with federal law and keep the aquifer under local control is the purpose for which the EAA Act was passed and implemented.

We would have been much worse off during the most recent drought had we all not been doing our part in the years leading up to it. Regulatory limitations are certainly part of the formula, but so is the human aspect. Across our region, we have come to value and accept our role in preserving the aquifer to the point that we can endure a drought such as the last one, with greater assurance than ever before. Together, all of us who depend on the Edwards Aquifer have shown definitively that we are up to the challenge.

Managing The Aquifer During Severe Drought Through The EAA Act 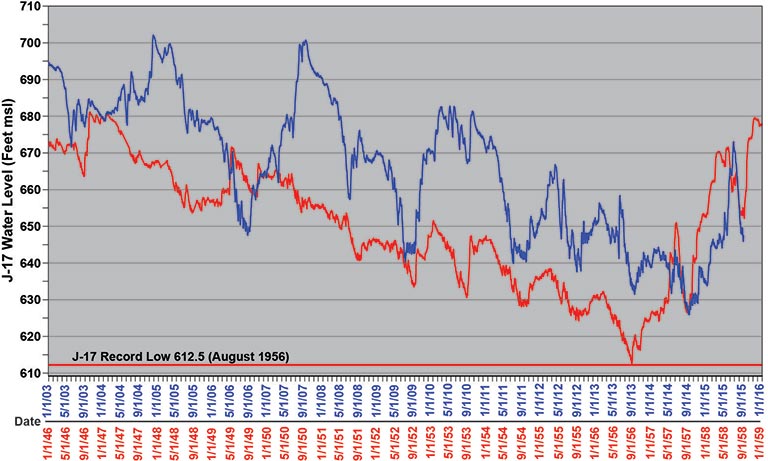 By the end of 2014, actual permitted pumping from the Edwards was 2.6 million acre-feet less than predicted by a population growth model for the period 1997 through 2014. 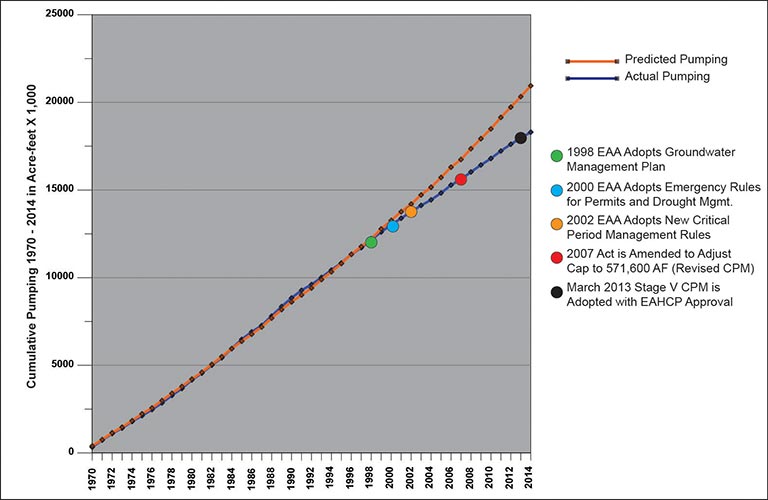 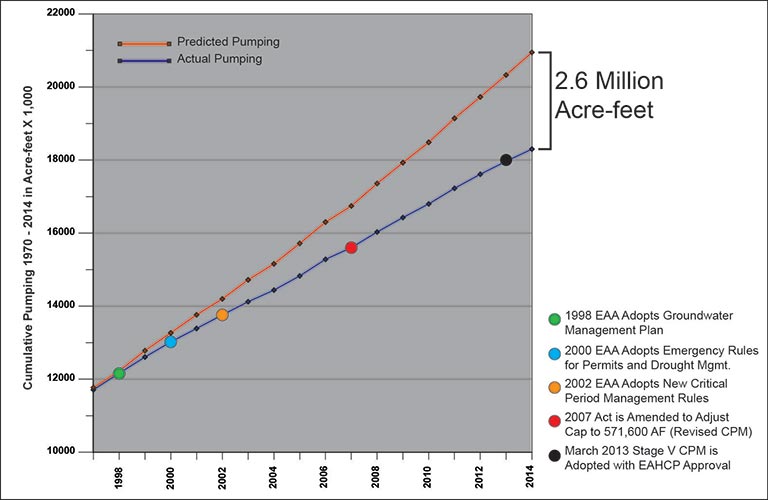