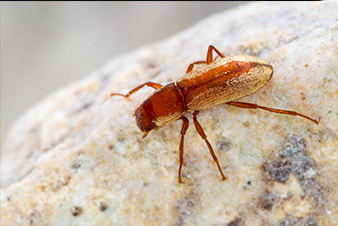 Authored by Connor Helsel
The Comal Springs dryopid beetle (Stygoparnus comalensis) is a subterranean aquatic beetle found exclusively in the Comal and San Marcos Spring systems of the Edwards Aquifer in Central Texas. The foremost threat to the species is over extraction of water from the aquifer, as Comal Springs dryopid beetles rely on consistent levels of springflow in and around the spring openings they inhabit (U.S. Fish and Wildlife Service [USFWS], 1997). The Edwards Aquifer Habitat Conservation Plan implements water quality monitoring and Conservation Measures such as the Voluntary Irrigation Suspension Program Option and the Aquifer Storage and Recovery programs to help maintain springflow for these aquifer dwelling species.

The Comal Springs dryopid beetle is the only known subterranean member of the family Dryopidae (USFWS, 1997). Physically, the species has non-functioning eyes and wings, a reddish-brown and thinly pigmented, translucent body, segmented antennae, and has been described as the “long-toed water beetles” (Arsuffi, 1993; USFWS, 1997).

The Comal Springs dryopid beetles respire underwater via a plastron, a mass of setae on the underside that work to trap a thin layer of air and force the diffusion of dissolved oxygen from the surrounding water (Brown, 1987; USFWS, 2013a). This method of respiration is most effective is areas with ample springflow, since high springflow equates to increased levels of dissolved oxygen in the water (USFWS, 2013a).

Comal Springs dryopid beetles are most commonly found in subterranean areas where little is known of their behavior, reproduction, and lifespan in the wild. Though, it is believed that larvae are laid in air filled voids within spring openings as all other known dryopid beetle larvae are terrestrial and inhabit moist soil along stream banks (Brown, 1987; Kosnicki et al., 2019; USFWS, 1997). The Comal Springs dryopid beetle cannot swim and the exact depth to which this species navigates within spring opening is unknown (USFWS, 1997).

Critical habitat for the Comal Springs dryopid beetle is designated as 39.4 acres of surface and 139 acres of subsurface, specifically the beetle has been collected within 360 ft (110 m) of spring orifices (USFWS, 2013b). Comal Springs dryopid beetles have been consistently collected in and around the roots of sycamore trees growing near spring openings; these root mats may serve as the primary habitat of the species (Kosnicki et al., 2019).

The required temperature range of the Comal Springs dryopid beetle is that of the springwater at Comal and San Marcos Springs, 22 to 24°C (Edwards Aquifer Recovery Implementation Program, 2012; USFW, 2013b).

Diet is thought to be comprised of bacterial biofilms of decomposing leaf and wood material, particularly that of sycamore roots, although the precise food source remains unknown (Kosnicki et al., 2019; USFWS, 2013a).