As provided for in the Edwards Aquifer Authority Act, the EAA has a governing board composed of 15 directors elected from the single-member election districts and two non-voting appointed directors. The elected directors serve staggered four-year terms which expire December 1 of each even-numbered year. Accordingly, the board orders elections of the appropriate number of directors on the uniform election date in November of each even-numbered year. If a director’s position becomes vacant for any reason, the board appoints a qualified person to serve until the first election of directors following the appointment. If the position is not scheduled to be filled at that election, the board provides for a director to be elected to serve in the position for the remainder of the unexpired term.

For 2020, seven of the fifteen elected board seats are up for election. At the July 14, 2020 meeting of the Board of Directors, the EAA called the election of seven voting members representing the even-numbered districts. The term of office for those seven elected districts shall be for four (4) years, expiring on December 1, 2024. The districts up for election include the following:

Candidates wishing to be on the November 3, 2020 ballot, must file an application with the EAA no later than 5:00pm on August 17, 2020. The application and required forms may be accessed on this page (Election Packet), or by contacting the EAA Election Officer , Ms. Jennifer Wong-Esparza at (210) 477-5116 or jesparza@edwardsaquifer.org. Applications may be submitted in person at the EAA office or emailed to Ms. Jennifer Wong-Esparza.

Please utilize the interactive map below to determine the district in which you reside. 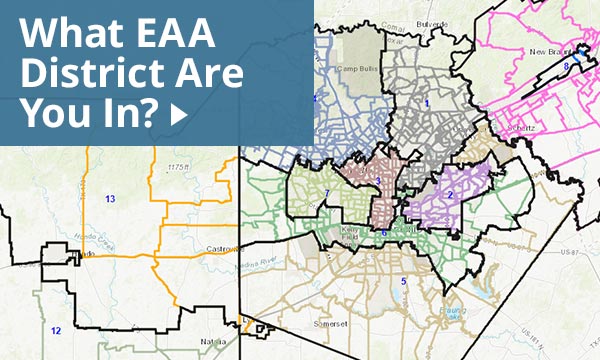 In light of the COVID-19 situation, effective immediately we are adopting Social Distancing Measures.
Please click HERE for more information.